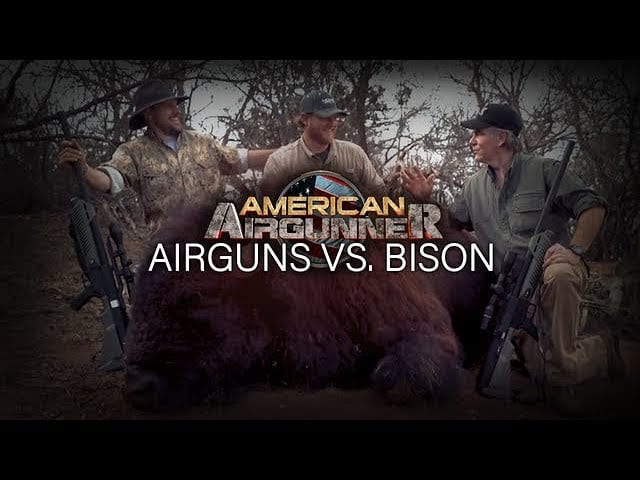 One of the best representations of the power big bore air rifles, Steve Scott, shows off the power of the Umarex Hammer on three big game species. He hunts an American vision, and as a bonus, this video, Scott takes a Gemsbok and a Blue Wildebeest in Africa.

1. Each animal shot expired quickly. Hunting with an air rifle is centered around shot placement. Since you don’t get the “shock,” a centerfire rifle produces, the bullet kills by creating a hole in the animal much as you would see with a round ball in muzzleloading.

2. Shot placement: To build on the first point, Waiting on the right shot angle is as critical as hunting with a bow. In the American Bison hunt portion of the video, Steve Scott waits patiently at a close distance for the bull to give him a broadside shot. For several minutes we held off on taking a frontal shot, one you could make with a centerfire rifle, to guarantee he could he hit soft tissue to maximize the wound channel.

3. Scott usees the artillery hold for making a perfect shot on the vision. The artillery hold is just a loose hold instead of gripping the forestock like on a centerfire rifle. Use your open palm at the point where the rifle is balanced. In this video, it looks right in front of the trigger guard on Scott’s gun. Grip the buttstock as lightly as possible and lay your thumb along the top of the stock instead of around it. This hold helps steady big bore air rifles when shooting off-hand.

4. Airgun hunting is still hunting. Hunting fundamentals apply even if the gun looks different and uses a different propellant. This video shows airgun hunters are hunters too, even on big game. If anything, the attention to detail if far greater in big bore big game hunting and ought to be treated with careful respect so as not to wound any animals.

Airguns Vs. Bison is a fantastic representation of hunting big game animals with big bore airguns. Steve Scott proves the effectiveness of the implementation and the execution of perfect fundamental hunting in a pressure-packed situation across three separate species of animals.