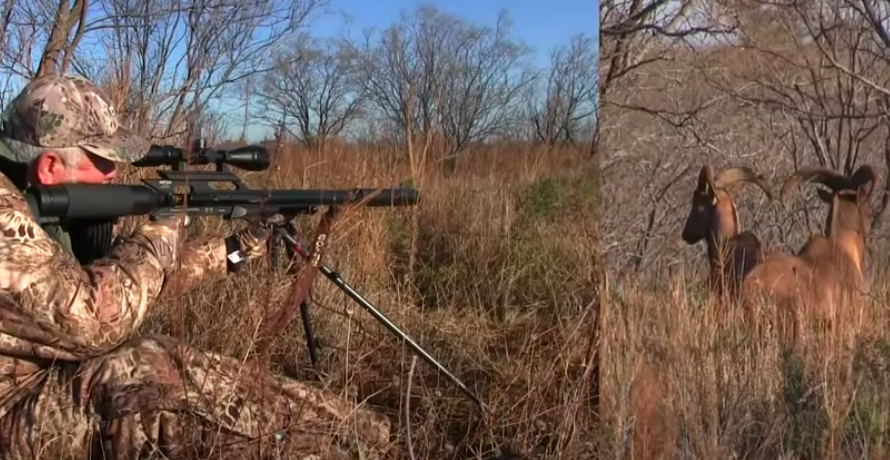 Join me on an airgun hunt for an aoudad (Barbary sheep) in Texas. I take the AirForce Texan .308 big bore PCP air rifle into the field after this large exotic sheep. This video demonstrates a clean, efficient, ethical harvest. My host was TM Exotics and Whitetail, hunting property in North Central Texas, in collaboration with an outstanding group by the name of Operation Pay It Forward (OPIF). The TM Ranch and OPIF invite active military and veterans on hunts, in gratitude for their service. I’ll go into more details on these two fine organizations and some of the great guys I met on this hunt in Part II of this two-part production. I was really impressed with the fine individuals I met from both organizations!

The initial plan was to use a custom prototype rifle in .457 to take and aoudad, but we had some equipment failure right before the hunt, so I had to opt for another rifle. Enter one of my go-to guns, the American-made AirForce Texan. I own this rifle in .257, .308, .357, and .457 in both rifle and carbine versions, and have gained a lot of trust in the design’s performance. On this trip I’d brought the .308 for hunting javelina and predators, and while light for the big, tough, aoudad, after due consideration I felt confident that it would work fine so long as I picked the right shot and placed it well.

Aoudad is big, they can stand 3.5” at the shoulder and weigh more than 350 lb, and they are notorious for having the ability to carry a lot of lead. For this reason, I determined that the ethical shot on a ram would be a brain shot from either the side or back of the head. I was worried that a frontal shot might not penetrate, knowing that the animal’s smackheads hard when the rut comes. I’d to have exercised the discipline that if a head shot was not available, or I could not close inside of the 60-yard range I wanted, to pass on the shot.

After starting out in a blind near a feeder, we only saw a small bachelor group come in and decided to drive the ranch and glass. If we found a shootable aoudad, we’d get out and set up a stalk. That’s exactly what happened, give the video a view and see the results. The ram dropped to one of the cleanest shots I’ve made, and the Texan confirmed to me once again it’s one of the best big bores on the market… in any of its many caliber offerings!