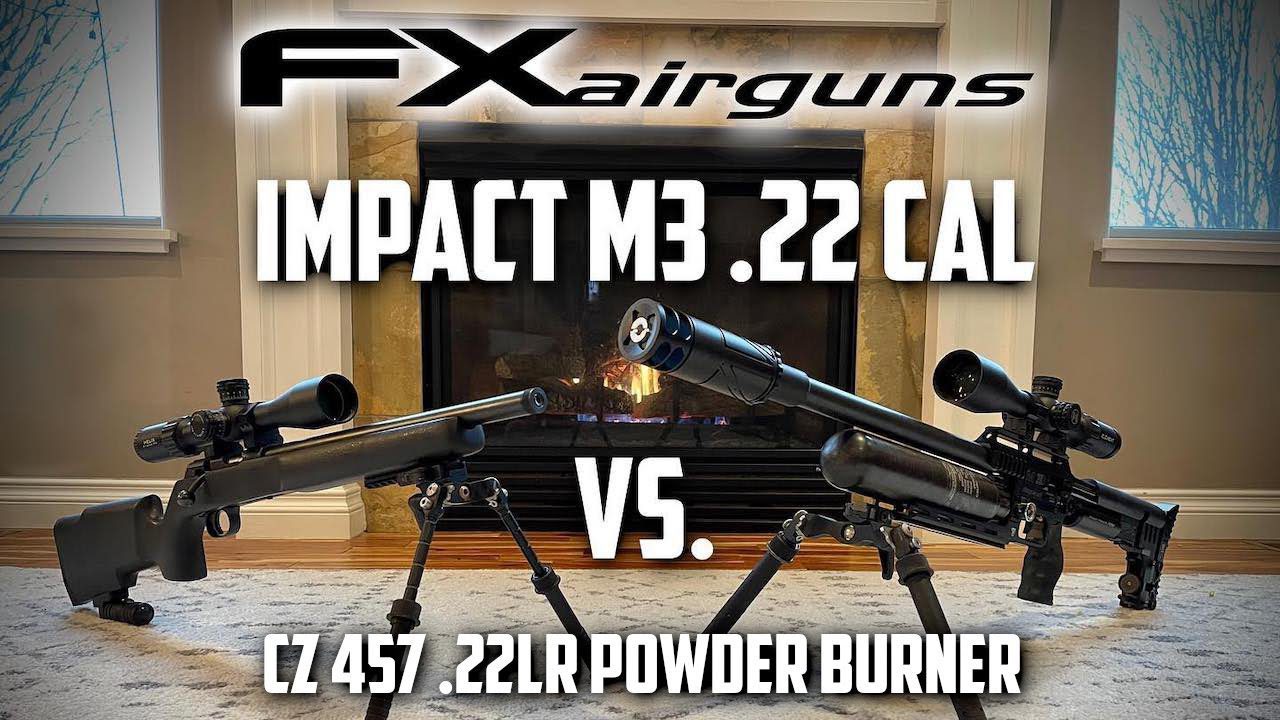 Can the FX Impact M3 in .22 cal outshoot a precision CZ 457 .22LR powder burner? With .30 cal pellets we already are beating .22 LR out from a precision and accuracy standpoint, but that’s in ideal calm wind conditions and within 100 yards. But what about with slugs and pushing the FX Impact M3 as hard as it can go getting closer and closer to .22LR power level? We aren’t there yet, but it is getting pretty damn close!

HUGE shout out to Josh from Pursuit of Accuracy! That dude knows so much about the CZ 457 platform and helped me out a ton in learning the nuances of the platform and learning as much as I can about .22LR precision shooting. He is getting his FX Impact M3 next week so stay tuned for some head-to-head shenanigans. Make sure to subscribe to his channel as there are a lot of similarities to what we are doing in the airgunning world: https://www.youtube.com/channel/UCovy…

I have embarked on a journey that will take my FX Impact M3 to go up against the CZ 457 .22LR. Early testing has been fun and this CZ is a fricken shooter! Part of my goal for this build was to keep the gun mostly bone stock or use off-the-shelf upgrades to go head-to-head with my Impact M3 that has been untouched by any black magic internal tweaking and tuning.

This project is less than a week in progress and I’ve already found factors that have made the .22LR more challenging to master. I’m learning firsthand the struggle to find not only ammo this thing likes, but enough of it to keep it fed. So far it’s loving Lapua Midas+, but I’ve learned the lesson of finding ammo from the same LOT number.

There are a ton of similarities, but quite a few differences. With the FX Impact M3 700mm Superior heavy barrel and wound out as far as I can push it at 175 bar, I’m slinging 34 grain Patriot Javelins 1010 FPS and 40 grainers around 920 FPS. Going up against the CZ 457 100 yards and beyond slinging the 40 grain Lapua lasers, the Impact is amazing but gets edged out slightly as the 1050 FPS and slightly higher BC of the powder freedom seeds.

100 yards and closer shooting KYL spinners, it is basically a statistical tie. Both guns are great shooters, but I will tell you 5 shot box magazines for the CZ 457 gets old really fast as compared to the 28 Shot high capacity magazine of the FX Impact M3.

Watching firsthand what FX R&D has been doing with the 800mm barrel kits and having the opportunity to shoot one myself in Utah during a prairie dog hunt, that additional 100mm (roughly 4 inches) puts power levels right in line with precision .22LR ammo. So here’s a technical nugget I’ve learned so far is the FX Airguns Impact 700mm barrel overall platform length is almost the EXACT SAME overall length as the CZ 457 with a short 16-inch barrel!

That really put things into context for me and the idea that moving up to an 800mm barrel kit will feel way too long. So the 800mm FX barrel kit is almost exactly the same length overall as the CZ 457 with a 20-inch barrel which seems to be typical (18-20 inches) in the precision .22LR community.

But here’s a mind-bender for ya. With Airguns, we see our velocities significantly INCREASE as we go up in barrel size (roughly 10+ FPS per inch of barrel length) whereas in .22LR they experience velocity loss as barrel lengths get out past the 20-inch mark and don’t really see any velocity differences in barrels 16-20 inches in length. What’s interesting though is there is a benefit for .22LR barrel length to be right at the point of velocity loss due to the fact that they experience an SD / ES tightening effect with the longer barrels.

So this tightening of SD / ES of velocities will be the first thing I’ll be testing once I get my hands on the 800mm kit. It will be interesting to see if we experience the same thing our powder burner counterparts do with a longer barrel. We Airgunners just get the benefit of making our projectiles faster with longer barrels! This is just a quick introduction I will be doing in this series, so come along for the ride! Next up – is long-range testing.