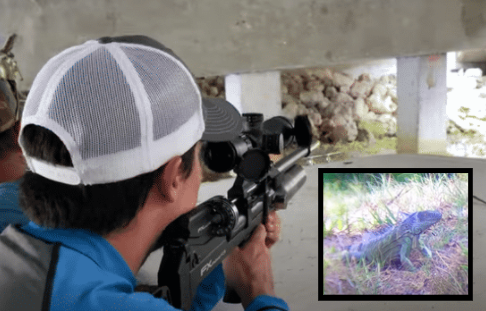 First off a HUGE thank you to Mike from @Reel Cool Adventures for the best boat guide / airgun hunting guide EVER! It was so awesome meeting Erlis from @OriOn The Iguana Hunter and seeing his scope cam in action and watching his lizard slaying skills first hand. Izzy from DonnyFL launched the longest shot of the day at over 100 yards and Donny himself was putting the smack down on GODZILLA with a variety of airguns.

I had no idea how crazy bad the iguana infestation was down in Florida! It was like Jurassic Park! This hunt was amazing for many different reasons, but one of the biggest highlights of the airgun hunting trip was to visit the HQ of DonnyFL and Saber Tactical. Hands down one of the best companies in any business I have seen run.

When we got out on the water I didn’t know what to expect. We were pulling triggers with the FX Impact M3 and various other airguns within 100 yards of launching the boat and it didn’t let up for the 20+ miles of waterway we navigated. The damage these lizards are causing is nuts. They burrow tunnels under the highways along the banks, causing major erosion issues not to mention the TONS of vegetation and habitat these GODZILLAS are destroying.

The FX Impact M3 in .22 was the go-to tool of choice for laser precision headshots. Since the boat was moving, it was almost impossible to range to a target and know your hold so it was a run and gun situation. These Patriot Javelin slugs were zipping over 1000 FPS and were insanely flat with ballistic coefficients double that of slugs. The accuracy was spot on. The FX Impact M3 is capable of slinging slugs over 80+ FPE, but we had it in the 58 FPE range with these 26 grain Javelin slugs. Even with a few errant body shots, it was putting down big lizards.

The cooking part of this episode was an adventure itself. Our guide told us the smaller ones taste better than the big ones and he was right. My first bite of GODZILLA was from the big one and there was a pretty strong fishy-ness to it with a hint of bad chicken. So I psyched myself out from bite #1. I got through it though and we made tacos from the smaller iguanas and they were MUCH better. I would definitely try this again!