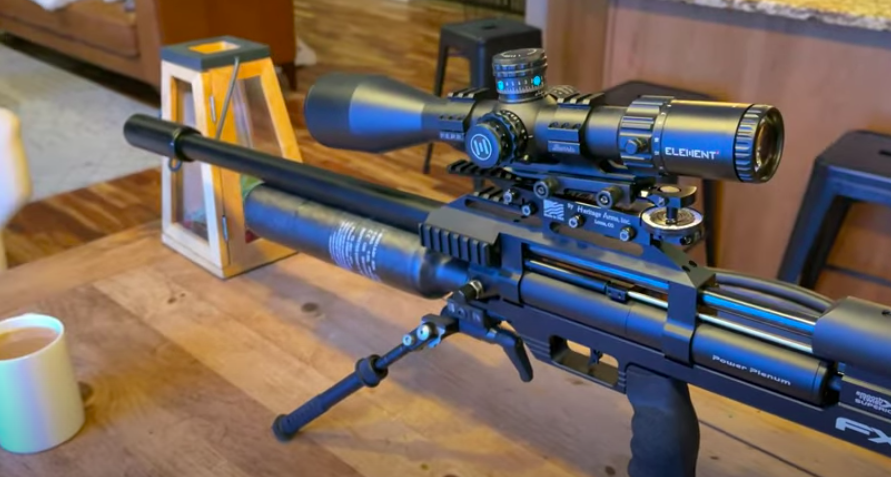 If you want to start pushing things out to these extreme long ranges which I would consider is beyond 200 yards for airguns, there is some great gear you can get your hands on now for airguns that steals a page from the playbook of our powder burner counterparts. From grips to monopods to custom adjustable rails, this gear will allow you to go REALLY far out with your airgun. Here is a quick kitchen table talk to go over my FX Airguns Maverick rig I am building out now for some fun ELR goals I have coming up.

Using big bore airguns has been absolutely AWESOME and I have been able to accomplish some crazy fun long range stuff with my AirForce Texans, but I have gotten bitten by this bug of what can be done with smaller caliber options .30 cal and smaller with airguns like the FX Airguns Maverick. In talking with Matt Dubber from Element Optics as well as Gerhard Slabbert and Roelf Vorster from Patriot Outdoors in South Africa who are doing some crazy cool stuff with FX Airguns .22 caliber. They are squeezing out every bit of long range juice they can in the FX Airguns .22 caliber due to the caliber restrictions they have in their country.

Here in America, we go big or go home. Big calibers and big FPE, but what if smaller could be the right way to go if you are wanting to seek out every bit of ballistic coefficient with your airgun? What I mean by that is this…. I see a lot of airgunners think the bigger caliber is always going to be the better long range option because the slug is heavier thus a higher BC, right? WRONG! Big and heavy for a given CALIBER is what you want! I see this question come up a lot with the AirForce Texan line up with the .257 vs. .308 decision. As an example, take a look at the NSA website where they publish the estimated BCs for each or their slugs. In .308, the heaviest option they carry is a 120 grain slug with an estimated BC of .185. In .257, the heaviest option they carry is 90 grain with an estimated BC of .22.

For long range shooting I will always take the higher BC option as it will retain its flatter trajectory and have less wind deflection as compared to the lesser BC option as long as it is accurate at 100 yards. But why can’t you just go even bigger in .308 to just push a slug that has a higher BC like the .257? Well if you go too big (long), the twist rate in your barrel won’t be able to properly stabilize the projectile and you will actually start LOOSING BC as it isn’t stabilized in flight and will yaw and even tumble. So there is a sweet spot.

But what about terminal ballistics and the “knockdown power” consideration when hunting? Wouldn’t a 120 grain slug in .308 have more foot-pounds of energy (FPE) than a 90 grain .257 slug? Yes, but this is where I think a lot of us airgunners need to get our noses out of data and start considering real-world performance and terminal effects of our ammo. As airgunners we quibble about FPE in the 10s and even in the 100s of FPE difference. The small to medium-sized game animal you are hunting isn’t going to “feel” the difference between 190 FPE vs. 230 FPE. It is kind of funny we get so wrapped up in that if you think about it.

The same goes for even the really smaller calibers in .22 up to .30 cal. That is why I am intrigued by what those South African guys are doing with extreme long-range in the .22 caliber getting their FX Airguns rigs up to 75 FPE and beyond shooting 34 and 40-grain slugs with BCs between .1 to .15 slinging that stuff around 1000 FPS! I think that actually might be the next area of focus our industry should be chasing. The HIGHEST BC possible in the smaller calibers.

More to come on this topic, but make sure to check out this video to talk about some of the stuff you get get to take your backyard plinker to an extreme long-range slug bomber. Such an awesome time to be an airgunner!